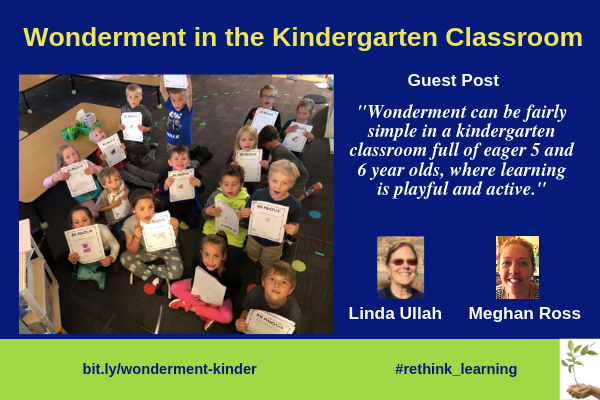 Take a step inside Meghan Ross’s kindergarten classroom at Brentwood Elementary school in Mead, Washington, and you will know. Each time I step into her classroom, as a volunteer, the first thing I notice is that every child is happily engaged, proud of his or her work, and curious to know more. Her classroom is vibrantly alive with wonderment.

When I returned from an around the world trip this past winter, Mrs. Ross asked if I would share my travels with her young learners. After giving it some thought, and talking it over with her, I decided to not just focus on that particular trip but share various trips during which I saw some amazing animals. This choice was made because learning about animals is part of the kindergarten curriculum. 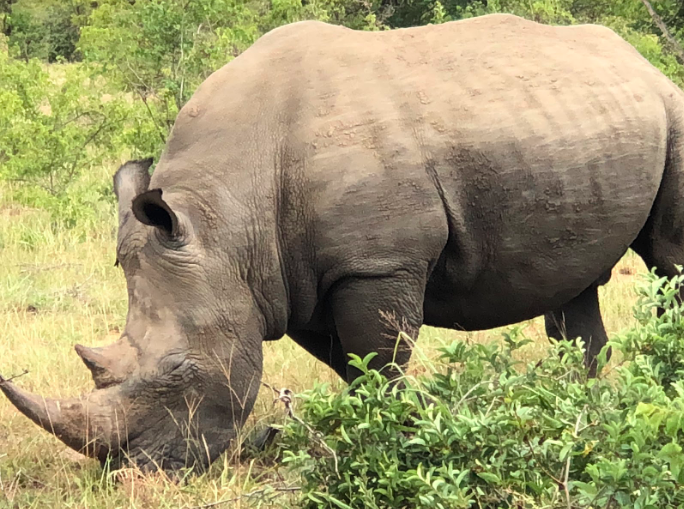 During my presentation, the topic of extinct and endangered animal species came up, and it was apparent that many of the young learners we’re both knowledgeable and curious about which animals are endangered, are extinct, and wanted to know more about why. The next time I was in Mrs. Ross’s classroom she shared with me that at least one of her parents had told her how excited her son was about the presentation I had done. Also, as I worked with her learners that day, they were filled with questions about endangered animals. Because of their curiosity and wonderment, Mrs. Ross and I discussed changing her springtime animal project to a project about endangered animals.

We began the project by showing a kindergarten appropriate video about why animals become endangered. This became a springboard for their young minds. They had so many questions. When we explained that they were going to do a project about endangered animals, and at the end of that project they would be the experts who would teach their fourth-grade buddy class about endangered animals, one of the young learners asked if they could also teach their parents. 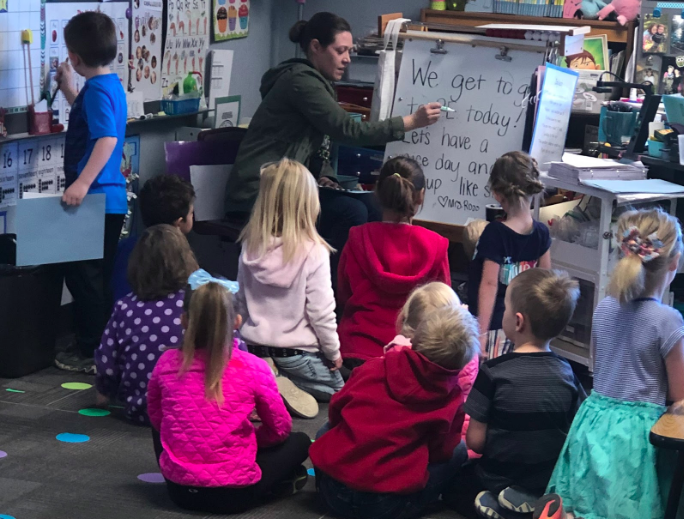 The learners began their project by creating ABC books about endangered animals. While working on these books, many of the young learners expressed surprise and concern that certain animals are considered endangered. They would make statements like, “ Oh no. ____’s are endangered. That’s my favorite animal.” At the end of this part of the project, they were each asked to choose an endangered animal that they wanted to research and learn more about. 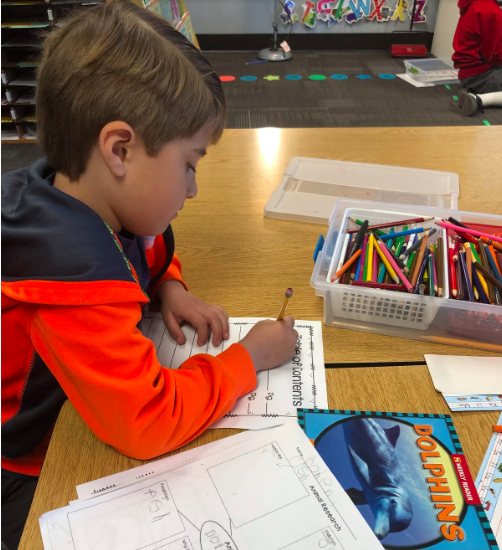 I had pre-ordered Chelsea Clinton’s book, Don’t Let Them Disappear, and when it arrived I read it to the class. 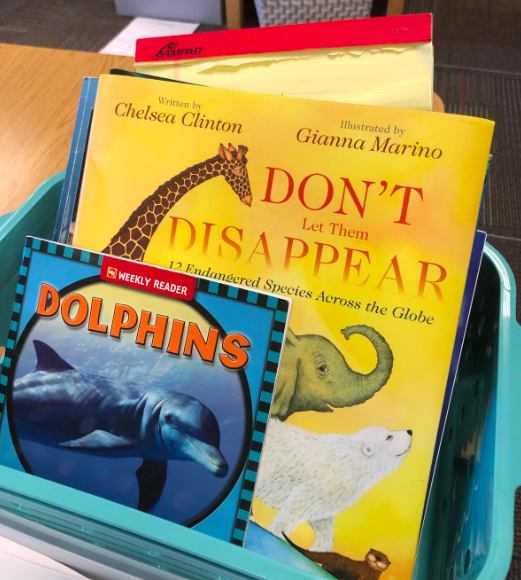 Because of their questions, comments, and active engagement, this took longer than the planned fifteen minutes I had expected it to take. What impressed me, while reading the book, was the knowledge these five and six-year-olds had about endangered species, and their interest and curiosity to want to learn more. 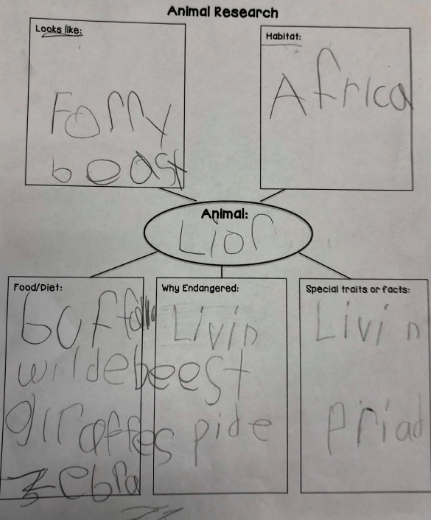 Once the young learners chose the endangered animal they wanted to research, each child took great ownership of that animal. They drew their chosen endangered animal with the help of some “Learn to Draw” animal books. While they needed help to find the information, and to fill out the graphic organizers, their energy and enthusiasm never ceased.  After doing their research and filling out the graphic organizers, they were ready to create their books about their chosen animal. 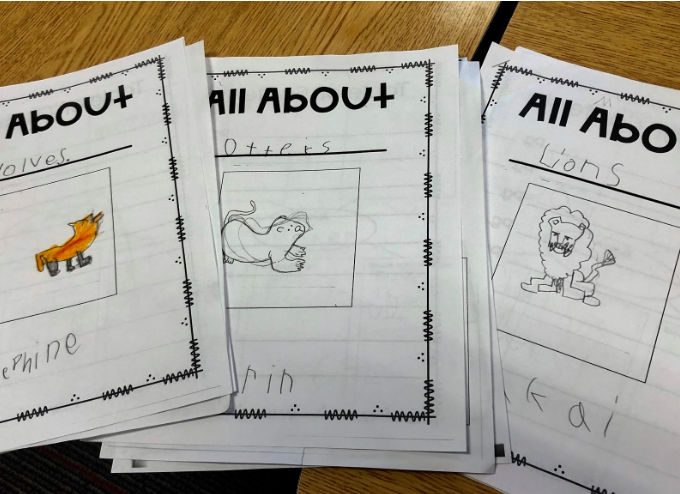 Once the young learners completed their books, they each presented the information about their endangered animal to their fourth-grade buddies.

Mrs. Ross’s reflection about the project:

The “All About” book each child created included information such as: what continent the animal is from, what type of habitat do they prefer or need, what do they eat, and why are endangered. They also included a diagram of the animal, a table of contents, and a map! It took the children over a month to complete this project. They were deeply invested, and proud of their accomplishments in both research and writing.

We rehearsed and planned for our big presentation! Some were a bit nervous they wouldn’t be able to read all the “big words” they had had help writing in their books, but I reassured them that they knew so much about their animals they would be able to explain all of the information with or without reading every word. There was quite a bit of excitement and anticipation to present their books to the fourth graders. Of course, the big buddies were very impressed with the kindergarteners’ wealth of knowledge, and they were very encouraging of this wonderful learning. 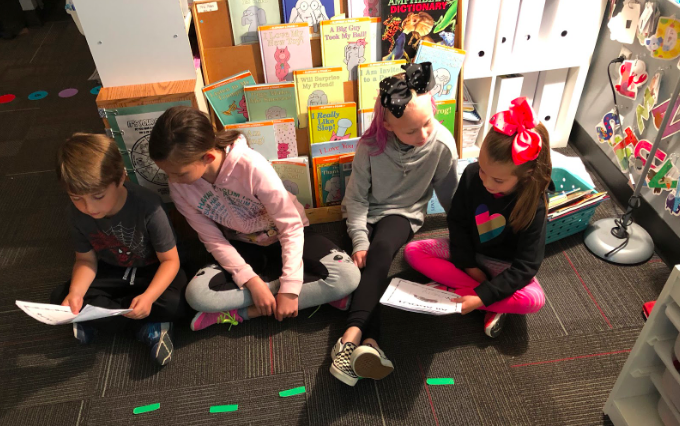 In years past, I have always kept my student’s animal research books in the class library for a week or so after completion to let peers read and learn from each other. But this group was just too excited to let them sit on a shelf! They HAD to take their books home to read to their families immediately; I think they only stayed in our library for one day! We were so thankful for the extra support and attention to this valuable project with Mrs. Ullah. Her animal presentation was a catalyst that brought more depth and meaning to a project already full of wonderment. I believe wonderment can be fairly simple in a kindergarten classroom full of eager 5 and 6-year-olds, where learning is playful and active. However,  it was extra magical to see the kids light up each time Mrs. Ullah came in to continue sharing her passion for animals, and exploring the world! I think the endangered animal project will be held in their minds as a highlight of this year for many years to come.

This is Barbara: Linda Ullah shared the journey with Meghan Ross of the Kindergarten students learning about endangered animals. Thank you for letting us have a virtual visit into your classroom filled with wonderment, Mrs. Ross! Please leave any comments at the bottom for Linda and Meghan.

Podcast Episode #20: A Sense of Wonderment with Linda Ullah