Jon Corippo is the Executive Director of CUE, past Innovation Officer, and was the Chief Instigator of the CUE Rock Star Teacher Camps for CUE. He began his teaching career in Clovis Unified and has had multiple positions as a teacher, administrator, trainer of teachers, and ran a weekly TV show. 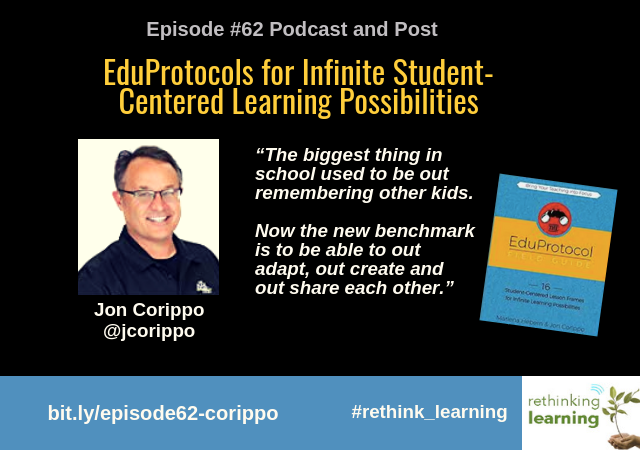 Jon has received many awards for his dedication to bringing technology and joy to teaching and learning. He co-authored EduProtocols and has a new book coming out soon. There is so much to share about Jon so I’m excited to share his story here. Enjoy!

What it was like for you as a student/learner

I grew up in Paso Robles, CA where they went from 3 wineries to 500 since I’ve lived there. I was in the class of 1969 in kindergarten and was a July 1st baby. I would say that some of the earliest memories of school for me were that I was the only kid that couldn’t tie his shoes. Some other memories of 1st and 2nd grade were that I never got blue stars and only got red. School kind of went like that all the way through for me. My freshman and sophomore yearbooks had no signatures. That was a school for me. Somewhere around my junior year, I started not caring what other people thought of me from what I heard through Danny Elfman’s song lyrics.” No matter what I do they won’t like me anyway”, so I can do whatever I want. That was the big paradigm shift for me. I did just enough with a 2.9 GPA to get me into football and played in college. In my junior year in college, I got into an advertising class that was hands-on where we were given a product and had to come up with a way to market it through multiple venues. That’s when my GPA shot up to a 4.0.

Jon Corippo – A New Way to Kick off PBL and 1:1 Smart Start

I love Michael Fullan’s quote “We are overly-dependent on corporately produced lesson plans.” If I went up to 100 teachers and said I was burning your teacher’s edition, what would you do?” They would be strapped. I made it a point to be able to teach K-11 Language Arts without a text. I understand Latin roots, how to teach parts of speech, how to connect those to technology and social media, and how to do things in a class that doesn’t have a bell curve. My school passion is to seek to undo what was done to me.

We need to remember that education is a People Business first.

Your journey to becoming an educator

I became a graduate assistant football coach. I learned a lot about coaching and subtleties with football along with idiosyncracies about teaching and learning.  Let’s talk about the end of year assessments. As a division 1 football coach, you cannot practice until August 5th and your first game is August 25th and it’s going to be on ESPN. You have 30 days to be ready. It is not about the first game. Everyone gets better by the second game and even better the third game. It’s a constant improvement cycle.

I actually went out and did some advertising for a few years and I was helping my wife out. She taught High School history and was doing a summer class. I love history and was giving her some ideas. I found it fun. I was between jobs and decided to become a teacher. My goal was to be a teacher that made the class effective and simpler, not to make the class smaller. My goal was different, so my results were different.

After teaching in Clovis Unified for 11 years, I got to open Minarets High School in Chawanakee Unified School District in ONeals, CA with Mike Ahoff. That district never had a high school. Mike had 20 years of experience at a high school with my K-8 ideas and mind-melded them. The stats in California were that 70% will not attempt college. If high school is designed for 30% of our kids, then we are wasting a lot of people’s time.

What if the school was cool for the other 70%? Half the things that we label SEL now happened in the 60s and 70s in the fun classes like woodshop, art, home economics. But now we’re in this test and punish model. If I’m not doing well in English because I’m not super interested in English and I get low scores on the state test, they then give me two English classes. This affects my ability to want to be in school at all. Then in the 90s, we began to make things too academic. If you have a kid who wants to get into Cal or Stanford, they can work hard and then they have a chance. I told my kids at Minarets that they could go to Fresno State with a 3.0 and no SAT. So I asked them, why are you working so hard?”

The Future of Education

What if high school was like this Venn Diagram? 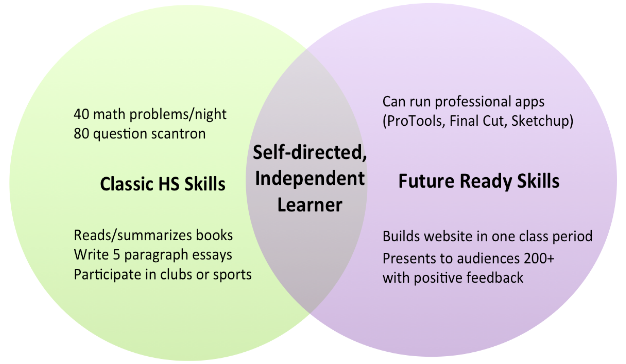 Employers are looking for people who are creative, unique, and can deal with uncertainty. Instead, we continue to teach kids to memorize 800 words for their AP class. I know there are AP teachers that kill it. What I’m talking about is the generalized plan of an AP approach to preparing them for college by denying them the opportunity to do projects while they are in high school.

If we say, “We can’t because of…, we will have big problems in the future.” You have to understand the DNA of the thing you want to rewire. A school was built to sort people in the good and not so good people. That was the goal of school given to us by Horace Mann who went to Prussia and saw a militarized school model which is what became the model for our high school model. We don’t have to continue doing what we’ve always done when it isn’t working anymore. If public schools and universities don’t change, look at how charter and home schools are growing like crazy. Public schools, in three years, as a brick and mortar entity could be largely gone as we know it if people decide to leave.

Your Journey at CUE

In 1991, my wife went to the CUE conference which spurred my interest. A year later, Sara Armstrong reached out to me to ask me to write an article about my 1:1 palm classroom that I was running. Then Brian Curwik at the Fresno County Office said to me that this is the year we are going to CUE. We went and it was just the beginning for me. My first presentation was at our affiliate, CVCUE (Central Valley CUE) and only one person attended. We’re friends today. What I’ve learned is that if every teacher was able to present to adults in public why they love teaching, then all of us would be better teachers. For those that don’t know what CUE is, it is an Educational Technology Conference for California and Nevada educators.

Jon Corippo: This is CUE BOLD

When I started working for CUE full time as the Chief Innovation Officer, we started doing our professional learning events. One of the things I realized that after all the people left our two conferences I wondered what was happening in between. Many had trouble justifying attendance at the conferences by their administrators.  You may not know this but over the past four years, we’ve trained over 50,000 educators outside of the conferences. That’s when we started Rock Stars for administrators and SuperCUE for superintendents to show them what state of the art looked like. That’s when it exploded because now you have the drivers leading the movement. 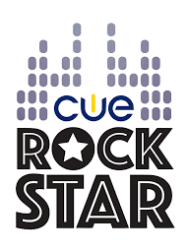 As Executive Director, we are expanding our services by doing the Rock Star Black Label where we bring a CUE event to a series to schools. We bring top speakers to a school for a $120/per person/per day especially for those schools that cannot send anyone to either of the two large conferences. It gives the school or district the conference experience without the cost for registration, jets, hotels, and expenses. 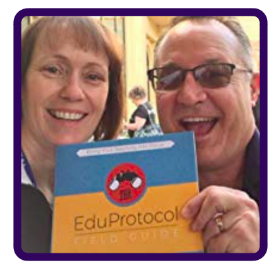 Marlena Hebern and I worked together two years at Mariposa County Office of Education. When I first got there, Marlena was a classic teacher and started showing her the different twists and wrinkles of a different approach. She took a few of those things when she transitioned back to the class for about a year and came up with a bunch of new things. In some degree, I laid the tracks for EduProtocol Field Guide around the concept of not doing a different lesson every day. I’m just going to change the content. Marlena put the train on the tracks by building other things in that same vein. The idea is not to take home stacks of papers because I can grade it real time in class. Some of the activities involve Smart STARTS, the 4 C’s, Iron Chef EduProtocol. The Frayer Model was built as a way to understand vocabulary but it also is a way to build the culture and do so much more. 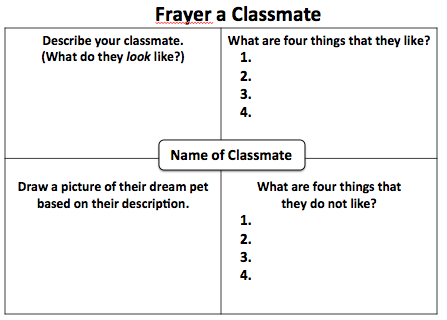 What’s next for you

We’re working on “EduProtocols2” with an even dozen of new ideas and working another book with Cori Orlando (@CoriOrlando1) “Know Better, Do Better” where we throw ourselves under the bus around things that were industry standards and then give the modern solution to do now.

This is Barbara. There is so much more in the podcast with Jon. Please listen and leave a review for Jon. Enjoy! 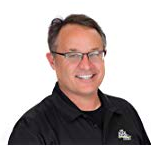 Jon Corippo has proven excellence as a presenter and event organizer who routinely plans and executes small, medium and large EdTech training and educational events that are well presented and get very high marks from audiences. He developed and executed training for over 45,000 educators from 2015-2018. He is the co-author of The Eduprotocol Field Guide, an Amazon Best Seller. Jon leads the CUE staff for Fall CUE and Spring CUE events, including all aspects of the events (marketing, logistics, innovation and vendor relations).

Jon is award-winning and renowned for innovation in the use of Apple products in a large group of Ed Tech communities, including Apple Distinguished Educator Network, Google Certified Teachers, Computer Using Educators (CUE), Central Valley CUE and ISTE. Grew CUE membership from 9500 to 23,000.

Jon planned and implemented the complete design of Minarets HS, including Challenge Based Curriculum, MacBook imaging and rollout, wireless infrastructure standards, classroom pedagogy, staff recruitment, and hiring. While serving as Chief Innovation Officer at CUE, he grew the number of teachers served by over 200% over a 3-year span, with over 90% positive feedback.

Jon is an expert trainer of adult educators and students and is honored to be an ADE and GCT, as well as highly sought after presenter on many subjects, including Film and Video production, Lesson Planning and Design, School Culture, Ed Tech tools and very popular in Apple Executive Briefings and Apple Training Events. He was a Lead Learner for the Google Teacher Academy, Mountain View 2014 and has lead international events in Mexico, Austria, and Australia.

All of Jon Corippo’s Presentations on SlideShare