Episode #50: Being Joyful and Finding your Awesome with Bethany Hill

Bethany Hill serves as Lead Learner, Chief Energy Officer, and Chief Storyteller at Central Elementary in Cabot, Arkansas. She has been in education for 19 years in the roles of kindergarten, first, second, and third-grade classroom teacher, curriculum coach, assistant principal, and principal. Bethany is one of the originators of #EduAR and founder of #JoyfulLeaders. 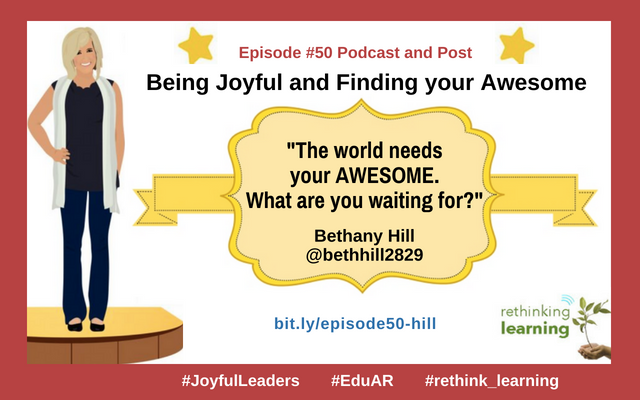 I have been following Bethany on Twitter for some time and am constantly inspired by her especially as Chief Energy Officer. I also really wanted to talk about what it means to be joyful. Below are excerpts from the podcast:

You and your family

I live right outside of Little Rock, Arkansas about 30 minutes from the capital in a community of Cabot. I went away for college and came back to live here. All of my family lives here. I have been married to my high school sweetheart for 24 years. We have two boys. Tyler went to the University of Arkansas as a secondary education planning on teaching math at the middle or high school level and coach. Garrett just finished 9th grade at the Cabot Freshman Academy in the same district I serve as a principal. 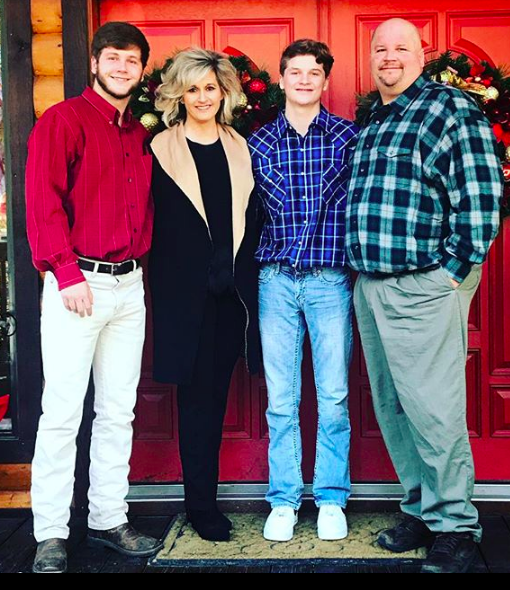 Your background in education

When I was a little girl, I grew up with the best parents ever. We did not have a lot of money, grew our own food, and my mother made our clothes. That was my world, but I never wanted for anything because I was very loved and cared for. From the time I was very little, I just wanted to teach. I pretended to teach my stuffed animals, created a teacher name for myself, and it was always what I did. No one in my family went to college so that was a big dream for me and I did in spite of not having the financial backing for it. We found ways to make it happen. I’m the first one to graduate from college in my family and then to go on and get a masters. I’m very proud that my son will be the second one to graduate from college from my side of the family. 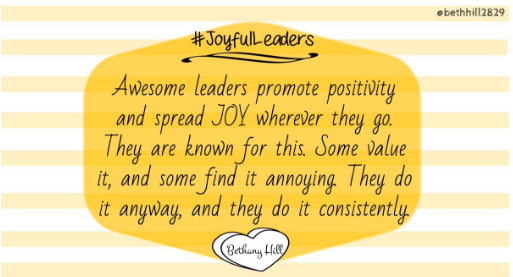 Transitioning to Principal of Central Elementary

We have about 500 kids in pre-K to 4th grade. We have quite a few young children, around 100 of the kids four-year-olds. We have 70 certified and classified staff and we’re in Cabot School district with about 12,000 which for Arkansas which is quite big. When I first became principal there, we were around 400 kids but we’ve had a growth in our community in the last couple of years. I added a new Pre-K classroom a couple of years ago and last year an additional Kindergarten classroom, so we’re full now with no extra room. 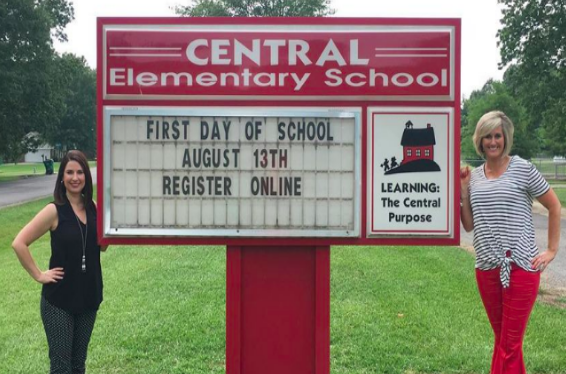 I was assistant principal at a different school down the street and had to step into a new role with a new staff. I didn’t know what to expect and either did the staff. We spent a whole year building relationships. We started with the Energy Bus by Jon Gordon that the whole staff read even though it was really not about education and was for adults. The book has 10 rules that are guiding principles on how to live a joyful life. The story is around a parable of a man named George who was negative with the glass half empty, had a lot of negative things happen to him, and was in a negative place in his life. He meets someone called Joy who shows him a different perspective. Over time, he begins to learn that it really is how he sees the world not what’s happening to him. It’s a very empowering book and wanted to start with it because I didn’t know where everyone was professionally speaking.

The book was a starting point for forming a bond, growing the same vision, and caring about ourselves as educators before we take care of kids. That first year was really great to get to know everyone, know the kids, and learning the culture of the building. The second year, we kept on learning from the Energy Bus and grow from that and became an Energy Bus Model Campus. Things fell into place because we were celebrating success. When Jon Gordon decided to transform that part of his company, he had been following some of the things we were doing at out school. They reached out to us to see if we would pilot the idea of a Model Campus and that has been a great experience. We embedded that language into our building and families and community picked up on it. After they review the 10 rules, there is a teacher pledge about having a positive outlook over the school year. It is a great way to kick off the year in a big and positive way to set everyone up for success. 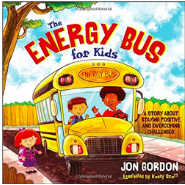 There is a children’s book also about the Energy Bus with 5 rules in it. All of our classrooms have that book and they read the book to their kids to go over the 5 rules and take the student pledge. There are a free discussion and activity guide for teachers and parents. www.EnergyBusKids.com.

Niki Spears created the Energy Bus for Schools and we are using this idea to push leadership for kids. We work with them to discover their interests, passions, and goals and turn that into something they want to pursue. We started with Niki and were the first school, then there were 5 and now there are over 50 schools.  https://www.smore.com/chzss-the-energy-bus-for-schools 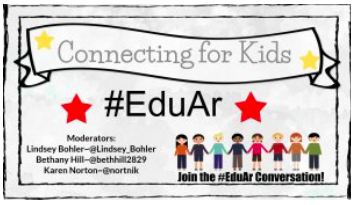 #EduAR for Arkansas is every other Thursday evening from 8:30 to 9:30 pm CST with me, . We focus on various topics and sometimes we do a series that might last two or three weeks on a particular topic. Sometimes the originators: myself, Lindsay Bohler @Lindsey_Bohler, and Karen Norton @nortalk, moderate together or alternate but we also have guest moderators too. We went on a long streak where we didn’t moderate at all because we had so many guest moderators lined up. Some of the people include Dave Burgess, Todd Nesloney, Aaron Hogan and so many more awesome educators and authors. 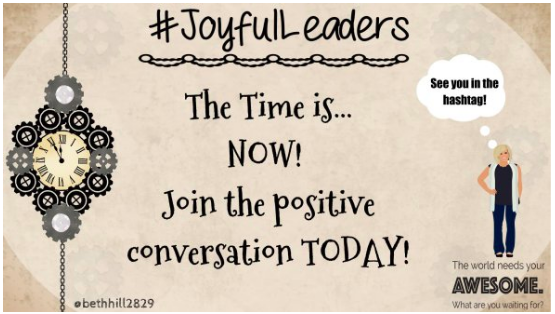 #JoyfulLeaders is where I’ve grown my PLN that just had its second birthday last December. It started as a doodle in my journal. It is not a set time or a chat but it can be a daily dose of joy through ideas, quotes, graphics, animations, and small statements that go out in tweets. It is a really great place to go when you just need a little fuel to add to your day. It can also be a place for you to share something that you feel can help someone else. What I love about is the people that go there to get things also contribute back to the Twitter feed so it just runs constantly and grows. I go there several times a day and see dozens of contributions to it. All you have to do is add the hashtag, #JoyfulLeaders. 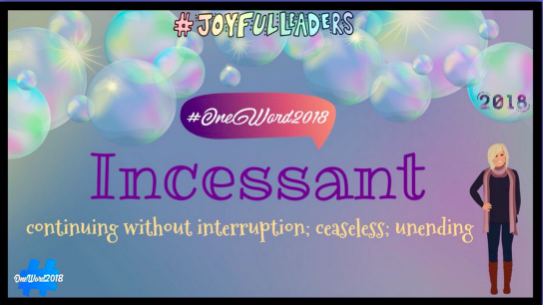 From Barbara: Bethany and I went into a deep conversation about behavior and why punishment is not the answer. Instead of putting the transcript in here, I hope you listen to why the world needs your “AWESOME.” 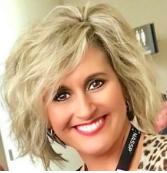 Bethany Hill serves as Lead Learner, Chief Energy Officer, and Chief Storyteller of Central Elementary (@CentralCabotpK4) in Cabot, Arkansas. She has been in education for 19 years in the roles of kindergarten, first, second, and third-grade classroom teacher, curriculum coach, assistant principal, and principal.

Central Elementary, where Bethany serves as the lead learner, became the very first Energy Bus for Schools Leadership Journey model campus. Since the summer of 2016, more than 50 schools have joined Central on the bus! She is one of the originators of #EduAR, a weekly Twitter chat for the state of Arkansas. The chat takes place Thursdays at 8:30 CST.

Bethany is the founder of #JoyfulLeaders, a movement on Twitter devoted to trending positivity in the education profession. Follow her Facebook Page, Inspiration for Educators to receive resources and positivity regarding education.

For all of the Conversations on Learning podcasts with Barbara Bray,
click on the podcast tab at the top, the logo below or go to https://barbarabray.net/podcasts/ 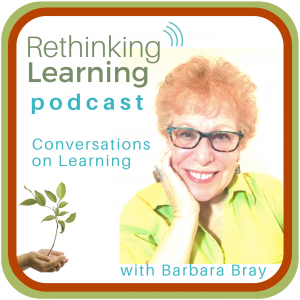