You can do that now. Lucky me! I participated in Dr. David Thornburg‘s session on Learning from the Holodeck at Fall Cue today.

The world’s first educational holodeck is at the pre-K to middle school campus of Colégio Atual, a school in Recife, Pernambuco, Brazil. The holodeck is a bare room with custom interactive computer software and hardware. Students create challenging missions that use their skills in the STEM (science, technology, engineering, mathematics) subjects to complete a journey. Middle School students take a simulated trip to Mars in search of evidence for extraterrestrial life. These students are in their school but instead of being seated in rows in a traditional classroom, they are in a special room, the Educational Holodeck.

With the Thornburg Educational Holodeck(tm), large screen displays are used to convincingly create the environment of an interplanetary voyage, where students are allowed to choose their destination for each journey (e.g., Jupiter’s moon, Io). The software is an open source program called Celestia.

The holodeck is a highly engaging example of an environment that is:

Students join teams based on their interest: culinary, engineering, space, and others to research how to live on the spacecraft over years on their way to Mars and back.

Colégio Atual holodeck has U-shaped tables so team leaders can sit closer to their team members. All the interactive images on the walls are produced by computers. This means, for example, that the room can immediately change from being a spaceship to being a microscopic chamber allowing children to navigate through the human circulatory system – all by changing the room’s software.

The teacher plays the role of mission commander, not as content presenter. Students need to do their own research in order to be successful in this environment.

HyperStudio is being used to coordinate a number of different software applications such as Celestia, Google Earth, a calculator, video chat software, and others. 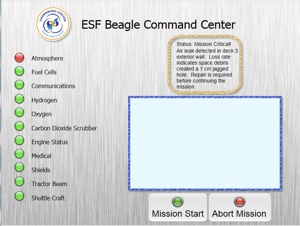 I want to be on a team using the Holodeck.

3 Responses to Imagine Traveling to Mars