Our Perspectives Come From Our Experiences: Guest Post by Dan Jackson 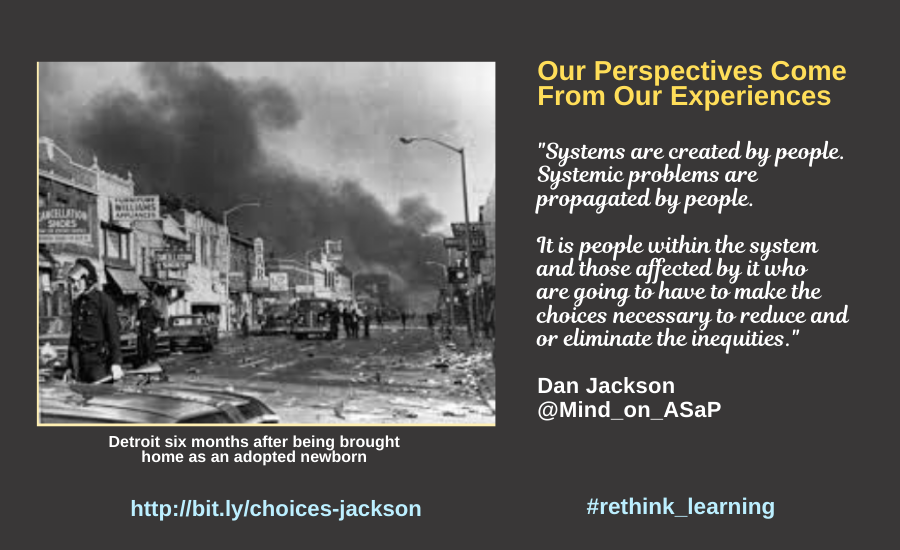 There was a post put out on Twitter from one of my favorites, Barbara Bray, that caused quite a stir two days ago. The quote Barb shared in a picture was innocuous enough, so it seemed. The crux of what several EduTwitters were upset about is that our choices are often dictated to us by systemic issues of which our students have no control. The systems and environments to which many referred dealt with equity, race, poverty and other seemingly insurmountable circumstances. 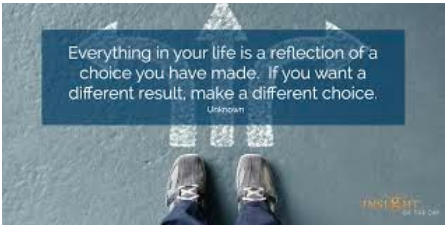 I ruminated on this overnight and awoke the next day to my usual morning reflection with Stephen Covey. Lo and behold, if the topic wasn’t about choices and consequences. Covey stated,

“While we are free to choose our actions, we are not free to choose the consequences of those actions. When we pick up one end of the stick, we pick up the other. Undoubtedly there have been times in each of our lives when we have picked up what we later felt was the wrong stick.”

In my Tweet, I also included an article that I’d written some time ago entitled, “Who really Raised Me.” It dealt with life’s experiences and how they shape who we become. In the first paragraph, I wrote, “I am who I am today because of the past decisions I have made and others made for me.” I agree that it is not always our choice of which stick we pick up, and therefore, the consequences are not of our own making.

Our Experiences Shape Our Perspectives

Today I gave it some more thought during my morning time and I was reminded of one of my first experiences in a high school as a student for my post-bachelor secondary teaching certificate from Wayne State University (WSU) in Detroit. WSU requires all of its students to have two stints in a classroom; one at the beginning and one at the end. One of those experiences is meant to be in an urban school and the other suburban, in order to give aspiring teachers different perspectives. I selected for my first school to be in Detroit, Murray-Wright. This is the latest information about the school in which I spent the fall semester of 2002.

The following graphs tells the story. My story is to follow. 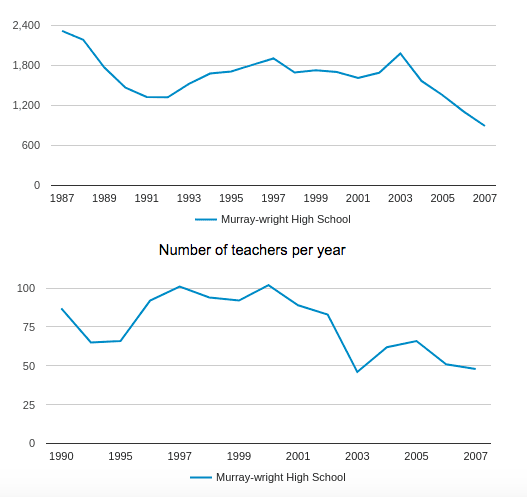 My first day in my new assignment was about two weeks into the start of the fall 2002 semester. I was excited! All students were required to enter through one set of two by two doors that narrowed to two doors in the vestibule. There they would all pass through a metal detector. Faculty with a badge was permitted to go in a third door to the right. I reported to the office and another instructor escorted me to the room where I was meant to observe three mornings a week. There I met Jorge Frito (name changed) the teacher from whom I was meant to learn. He handed me a textbook on economics and introduced me to the class as a student teacher who would be taking over the class for the semester. “Who, huh, what the . . .” was my internal reaction, yet I said nothing. He went on to tell me that he would be down the hall in a vacant classroom if I needed anything. Talk about baptism by fire!

There were about 40 students and 35 desks. Some sat on the window sill and others on the floor. There were fewer than 30 textbooks to share, and they were not permitted to take them home. I don’t recall precisely what I did that first day; I was in shock, and still am when I think of it. I went home that evening and got to work, telling myself, “these kids are going to learn economics!” Each of my scheduled days I went in prepared with an active, engaging lesson that would make economics fun. I brought in newspaper and magazine articles that showed relevance to what we were learning. I read each chapter and made my own study guides that included pictures, graphs, treasure hunts. There were class activities in which kids would collaborate and exercise their creativity. 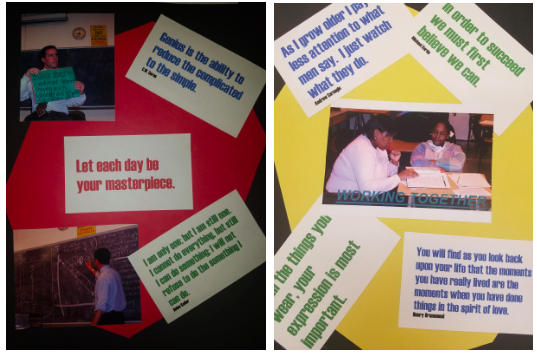 After some weeks, I came to realize that hardly a day went by in which there wasn’t a fight, blood is drawn, a bone is broken. I also noticed the number of kids in my classroom began to dwindle, 40 to 30, to 20, to 15.

Class, What Do you Mean I Have To Go To Class

One day Mr. Frito showed up with an overhead projector; “State tests in a week; I’ll take today’s class.” All the desks were full and he went about putting up questions with answers imploring the kids to take notes. Some days later I noted that there were only a couple of handfuls of kids in class, and one, who was there nearly every day, was noticeably absent. I went down the hall to inquire about the one missing young lady and to find out where all the kids were that had shown up for his test prep.

There, in the vacant classroom, Mr. Frito called his office, there were about 20 kids that were meant to be in my room learning economics. When I asked him what was going on and why all those kids were there, he responded, “You are teaching too much and they weren’t all that interested in that much learning.” When I asked about the missing young lady his response was, “get used to it; they come and go.” The young lady eventually returned to class. I asked her if everything was okay and she responded she had been in the hospital because she had been raped by her mother’s boyfriend. The lump has never left my throat. I’m not sure I know what to say, even today.

Today, after school, I went through my portfolio I keep of my “in-service” teaching days that I presented in order to receive my teaching license. It brought back many memories, not all of them, obviously, fond. (Both the pictures above and below come from that portfolio.) This reflection did bring to mind the reason why I became an educator. I wish to help all people reach their potential. I wish to give hope to all people that not all hope is lost. I wish to give all people the chance to dream. I wish to give all people experiences that provide them the opportunity to realize that it is not the cards they are dealt, but how they play them that matters.

These reviews made by my supervisor from WSU are indicative of my efforts toward these ends. 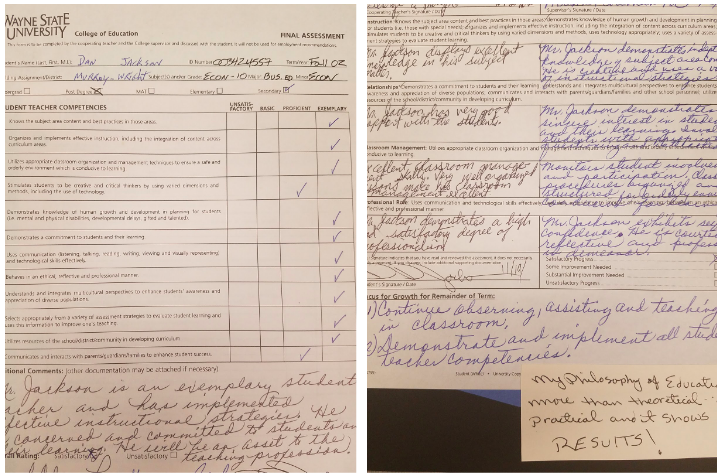