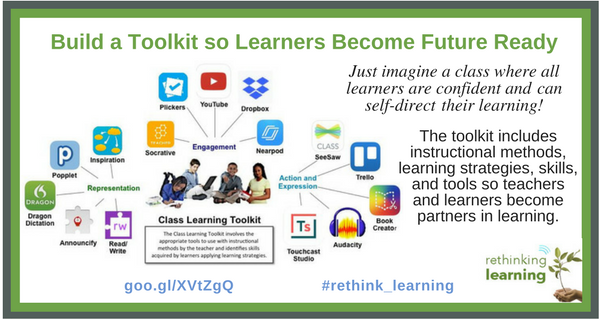 Most teachers join the profession because they want to make a difference in children’s lives. They want their students to be the best they can be so they reach their fullest potential. But that is not always easy with large classroom sizes, a wide range of differences of the learners, and the constraints and barriers within the system. There is a process that teachers can do to build a toolkit by teaching to the extremes which were addressed by Dr. Todd Rose in his book, The End of Average. You can read more details about no one being average in my post: Time to Ban Average.

A Class Learning Snapshot (CLS) helps you design instructional methods and learning strategies based on four diverse learners in your class or classes. What you come up with for the four learners helps you teach to the extremes instead of to the average learner. You can invite your learners to create Learner Profiles. so you have personal information about each learner. I share how Universal Design for Learning provides a process to understand how learners learn best in this post on UDL and the Why of Learning.

The CLS is about anticipating four diverse learners at the extremes that you have or will have in your class or classes. You then include their strengths, interests, and challenges using their initials instead of their names or S1, S2… I only added a few bullets for each learner. You can add more bullets or as little as you need for each learner so you can get a snapshot of all your learners.

You can ask each of the four learners directly how they prefer or need to learn or you may just want to design this section on what you learned from the CLS.

The Class Learning Toolkit (CLT) helps teachers plan for the materials and methods that they need and learners can use during their lessons and projects. When they identify the methods and materials, they then have the resources and strategies at their fingertips when they need it. Before identifying the instructional methods and learning strategies, you can review and research what tools are available and accessible that could support the four learners. Consider how the tools apply to the UDL principles. I updated this post after reading Luis Perez’s and Kendra Grant’s wonderful ISTE article 30+ Tools for Diverse Learners. 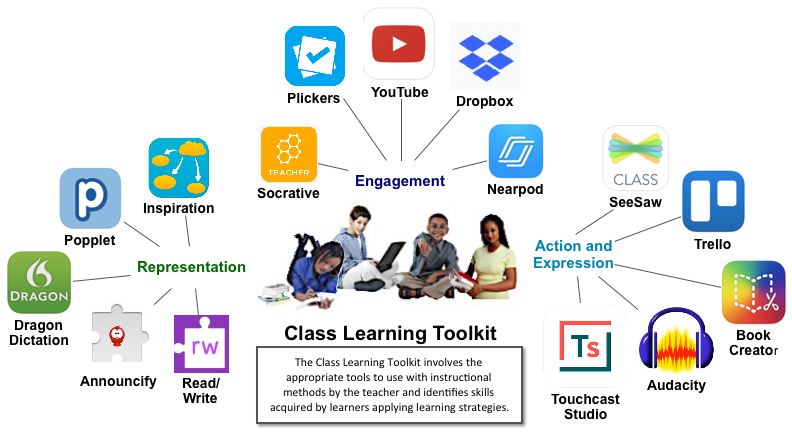 Build a List of Tools with Instructional Methods, Learning Strategies, and Skills

Teachers can create a list of tools and apps that can support their four diverse learners. They can build a chart similar to the one below and include instructional methods, learning strategies, and skills or competencies learners will acquire. These are just a few tools and ideas as examples.

The Class Learning Toolkit is not only about the tools; it is also about instructional methods the teacher uses to support the learners and learning strategies and skills that the four learners will acquire to develop agency.

Just imagine a class where all learners are confident and self-direct their learning. The idea of creating a toolkit that includes instructional methods and learning strategies, means the teacher and learners become partners in learning. No one can be an expert on everything. When the teacher steps back and looks at the extremes in the classroom instead of what they believe teaches to the average learner. There is no average learner. Actually, there is no average teacher. This process helps the teacher universally design lessons and activities that engage all learners. If you address learning strategies for the four diverse learners then you will support most of the learners in the class. When you identify tools, skills, and learning strategies and how learners can take ownership for their learning, they build skills that help them become future ready.

Here are a few questions to consider and let me know what you think.

Time to Ban Average in Education 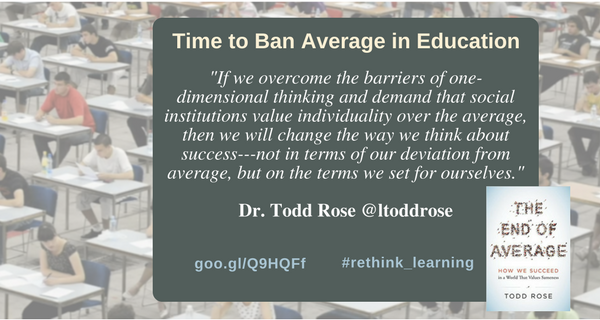 I read Dr. Todd Rose’s book, The End of Average: How We Succeed in a World that Values Sameness, and refer to it often. I highly recommend The End of Average for all educators. I believe every educator or anyone who wants the best for children and their future needs to read this book.  Every day we are measured against the yardstick of averages, judged according to how closely we come to it or how far we deviate from it.

Are you above average? Is your child an A student? Is your employee an introvert or an extrovert?

The assumption that metrics comparing us to an average—like GPAs, personality test results, and performance review ratings—reveal something meaningful about our potential is so ingrained in our consciousness that we don’t even question it. That assumption, says Harvard’s Todd Rose, is spectacularly—and scientifically—wrong.

Todd Rose’s Tedx Talk Sonoma “The Myth of Average” shares how there is no average person. Rose shared how the Air Force had problems with their pilots reaching all the controls in the fighter planes. They realized there is no average pilot and no one was the same height, weight, and other dimensions. You can see how each pilot has a jagged map. 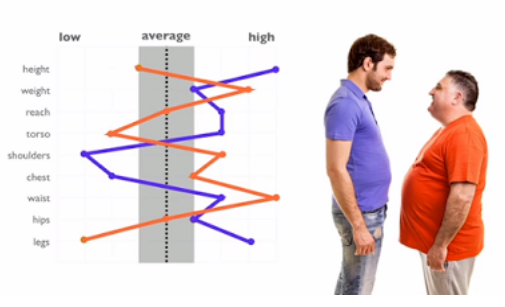 Solution: The Air Force created adjustable seats so they fit all types of fighter pilots and banned the average pilot. They realized that no one pilot fit what was supposed to be “average.”

Ending the Average in How We Learn

From Todd Rose’s Project Variability, he states that “even though we have the most diverse population in the world, we are unable to exploit this natural advantage in human capital.” Four percent of dropouts in the US are intellectually gifted. That comes up to 50,000 minds each year who don’t fit in the average model. How much of this is bad design? We design learning environments for the average learner. We call our system age-appropriate, but it is not. Learners vary on many dimensions of learning. 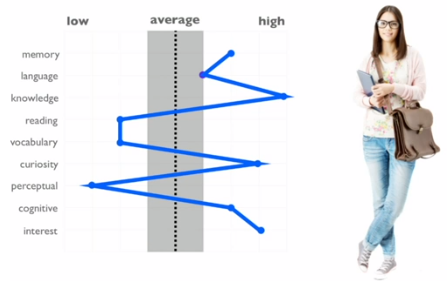 Each learner has a jagged learning profile. They have strengths, averages, and challenges. Just like the fighter pilot seat. If you design learning for the average, you design it for nobody. We have created learning environments where we can not expect learners to do what we want them to do.

How about if we ban average in education?

Dr. Rose was a high school dropout with a 0.9 GPA who is now a professor at Harvard. He ends his talk with:

“For every one person like me, there are millions who worked as hard and have the ability who are unable to overcome the drag the educational environment that is based on average. We  have a once in a lifetime chance to fundamentally re-imagine the foundation of our institutions so they nurture the talent of every individual.”

It is all about nurturing individual potential.

In October 2014 at Harvard, Dr. Todd Rose’s presented an 8-minute talk on “The End of Average”. Displaying brain scans from studies on human memory by Dr. Mike Miller in 2002, it was apparent that when comparing the average brain scan to individual brain scans from the study, “the average represented nobody”. Rose further points out that in many fields of study, it is discovered that there is no such thing as average in either cells, genomes, cancers or learners.

The problem is our education system is built on the assumption that there is an average learner. Let’s face it, textbooks are designed to be age-appropriate, standardized tests are designed for the hypothetical average learner with tests and curriculum following a similar average design. In addition, our education system was designed during the Industrial Era that was obsessed with average in managing factories. That system was very successful in preparing children for standardized jobs in the industrial economy. But we are no longer in the Industrial Age and neither are our learners.

Dr. Rose states that we need to prepare learners for an ever-changing world and that our primary goal should be to “support each learner to be the best they can positively be”. It is not good enough to teach to the average learner! We must be able to understand and treat learners as individuals. We can do that now as we have a science that studies individuals.